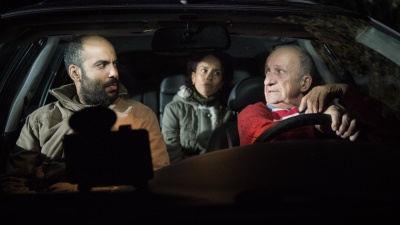 German public service broadcaster ARD is featuring a weekly series called "Lindenstrasse". Its a leftist tendency portraying of the life of people in the Bavarian Street "Lindenstrasse".

Recently it has added the present migrant crisis as topic, by adding the actor Mohammed Issa playing Jamal, who came to Germany lying to be a Syrian refugee, but coming out to be from Morocco. On his way to Germany, he came with his parents, who were said to be killed in the truck bringing them there. Dunja Dogmani and Ayman Cherif are playing Neyla und Yussuf Bakkoush, the mentioned parents. During the episodes Jamal finds out that his parents are alive, and the political correct and tear jerking phase starts. Not only does the series promote the acceptance of forgiving and even hosting the lying Jamal, by letting one family of the Lindenstrasse 'adopt' him into their flat, by going him one room, but even allowing the found parents to come there.

To add more illegal drama, a friend of the family, an old man called Adi, played by Philipp Sonntag, agrees to pick up the parents from Austria and help them cross the border to Germany. The couple is dropped at the border by the man, whilst he is taking in by the police who were following them. Lies over lies get the helper finally released and Jamals parents reach their son. The family agrees to lie about the identity of the parents, to avoid deportation, and tell everybody that they are friends. Jamal is only allowed to stay, as he is declared as teenager without parents. Having found his parents would change his status and he would be subject of deportation. Even as the father becomes sick, and there is a suspicion of him having tuberculosis, the mother of the family called Iris, who is a doctor, plays the entire sickness down, and as expected in such a series, she is lucky that Yussuf has just a flu.

In one episode, the neighbour Iffi Zenker, who doesn't support the hiding of illegal migrants calls the department of health, that appear at the door of the family with the illegals, together with the police. The episode ends there, and in the next episode, it is no longer regarded, leaving the speculation open, that the family successfully lied about the status of their visitors. The illegal activity yet continues, when the dad of Jamal wants to leave to another city where is thinks to be able to work. As the German family wants to keep Jamal in their home, they discuss the possibilities of offering Yussuf work. Yussuf claims to be a painter, to he is offered a 'test' job to paint the room of a neighbour. They offer him 100 Euro, but greedy Yussuf asks for 150 Euro, and they finally agree on 130 Euro. Also here we can find one subtle message and another illegal activity. The neighbour says, that for 150 Euro he can hire a German painter, and by agreeing on 130 Euro, their is a bargain, but it promotes, that even illegal migrants should be paid equal with German qualified workers. The illegal part is, that it promotes the hiring of illegal workers, that don't pay tax and have no working permit.

Lindenstrasse has evolved to a construct of false tolerance and even the support of illegal activities done by Germans to support another illegal activity, the hosting of fake refugees, that have even admitted their false being by lying about their identity. Morocco is truly not a war-zone and without doubt it is completely right to say, that those belong to the many economical motivated migrants.

Finally, all this is not just a disgrace to the legal system, but a slap into the face of all legal migrants, who have queued and waited, struggled and educated themselves to be able to come to Germany, to work and stay legal. Again it seems that to come illegal, and with a bit drama in the story, its more tolerable to support illegals rather than legals.

Lindenstrasse is paid since decades by the public service broadcaster ARD, which collects money from all households in Germany. And instead of being neutral, and catering to all citizens, it continuously follows a pure leftist and main stream political correct line, reflecting even in their news broadcasts, that are tendentious also.

It is high time for the German population to stand up against a money collecting media industry, that forces people to pay for something they may not even want to watch.