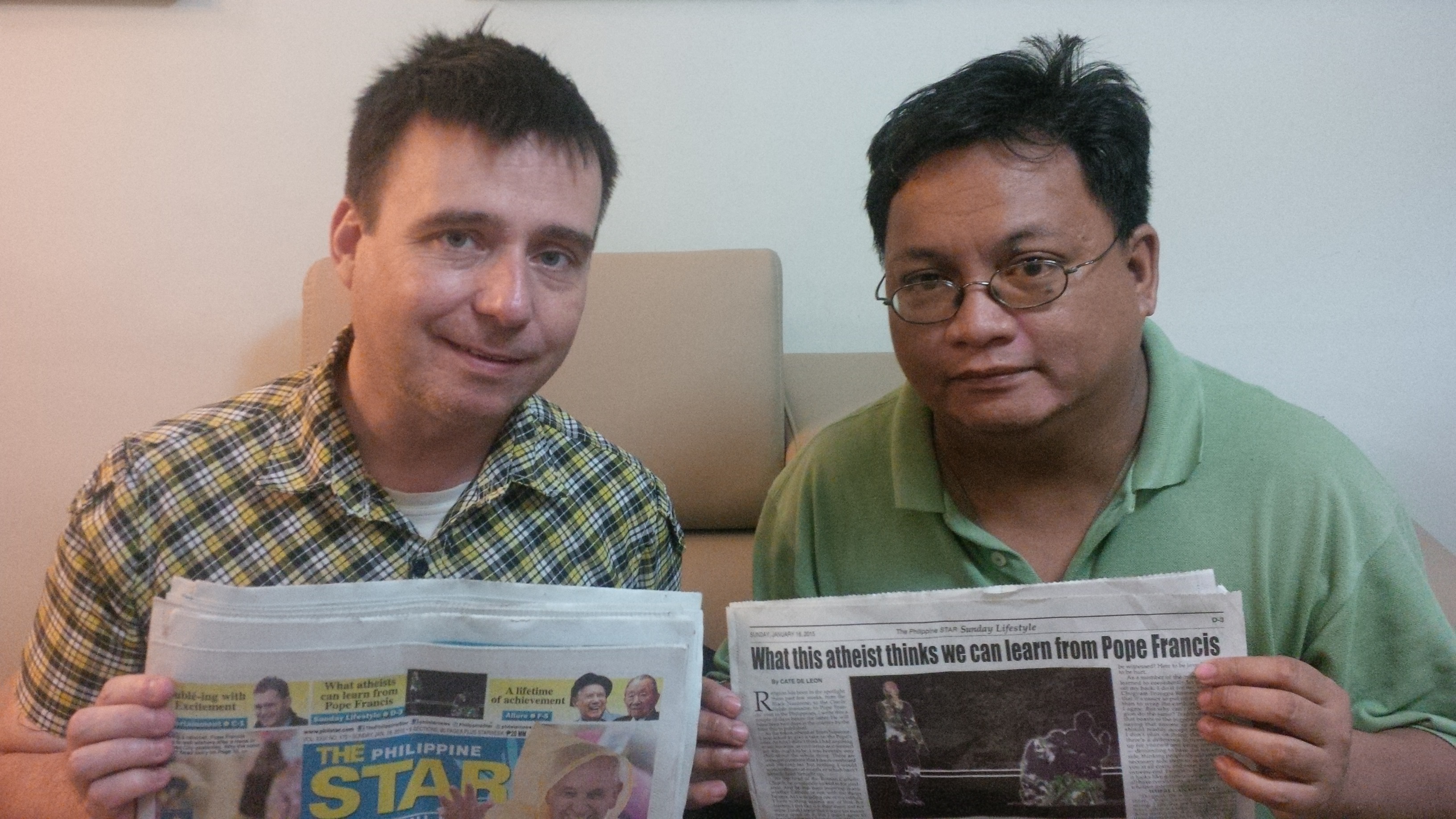 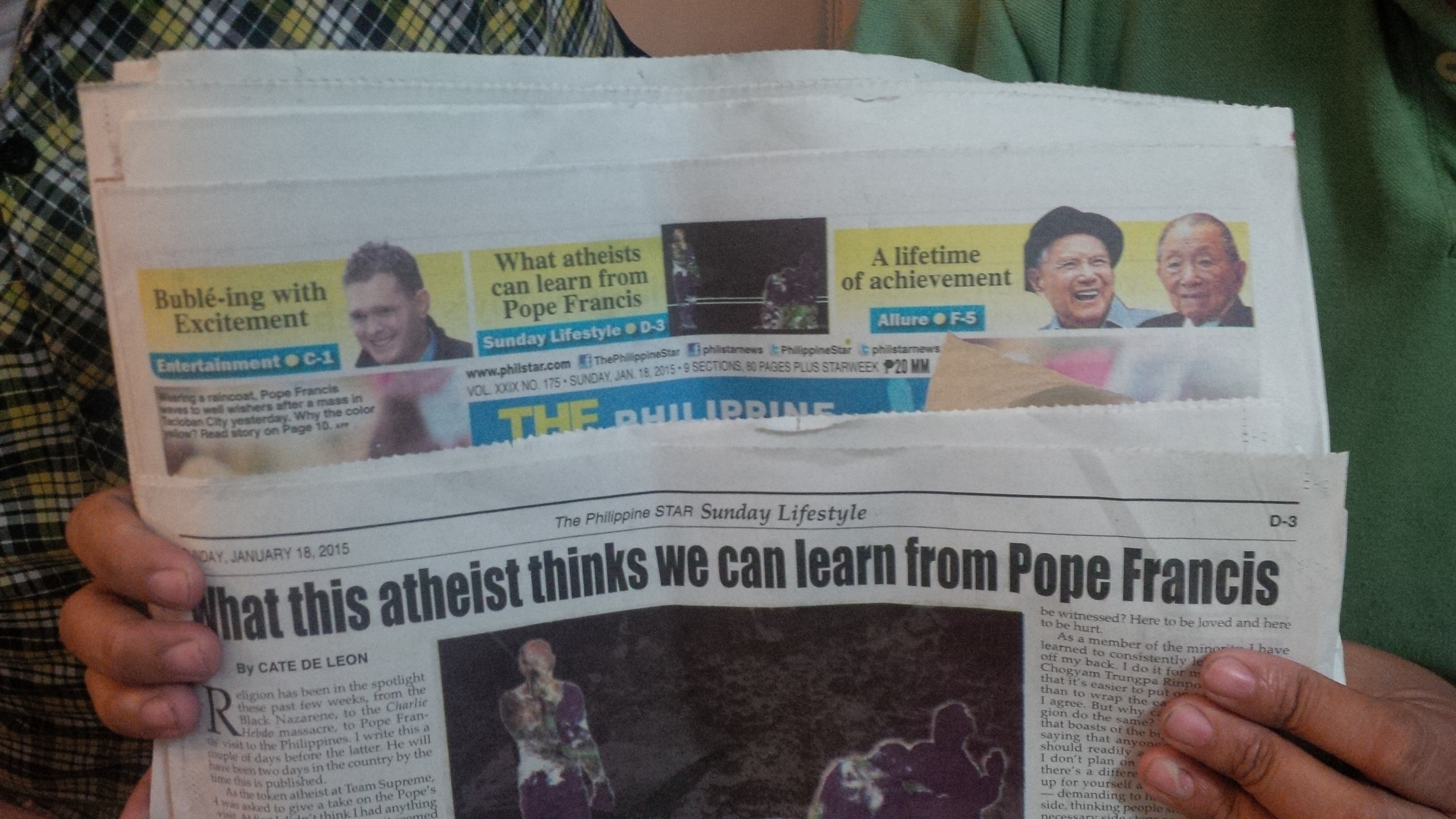 The mainstream media here in the Philippines has never gotten tired of covering those happenings that involve religion. Looking back at those events that occurred these recent years, one would think that news and opinions about atheism has no place on the front pages of very popular newspapers and the top headlines of top rating television news networks in this Spanish colonized Christian dominated country.

One of those significant affairs that got a lot of media coverage last year was the inauguration of the Iglesia ni Cristo or the Church of Christ owned Philippine Arena. Earlier this year, the procession of the Black Nazarene, which was celebrated on the ninth of January, got a very large amount of media coverage that even exceeded the attention, if there was any, given to the more important news that occurred in France during that same time. While the rest of the world’s media was covering the Charlie Hebdo massacre in Paris – which was considered an attack of religious extremists against freedom of speech, the local media still went on to give unreasonably too much coverage to the Nazarene procession like the country depended so much on it.

Last week during the second week of January in the year 2015, another religious occasion dominated the local news again. This time, it involved the pope’s visit to the Philippines. And just like the usual, the top headlines in the television news and the newspaper front pages had nothing but the pope in it. But ironically, the local media did not focus their attention on his quote during a press conference aboard the plane during his trip to Manila about his opinion on the Paris massacre. According to the pope during this press conference, a violent physical reaction to a verbal criticism is normal. But the media turned blind and deaf and went on to continue focusing on the illusion that the pope is all good and peaceful.

But just when you thought that this partiality of the media towards religion would go on, a breath of fresh air appeared on the front page of one of the country’s top newspapers last Sunday January 18 2015. Right on top of the front page of the Philippine Star newspaper and right above the big picture of the pope appeared the article title about Atheists. But you have to turn more pages further to be able to read the whole article.

The author of the article is an Atheist journalist named Cate de Leon and she wrote about what an atheist like her thought she could learn from the pope. She wrote about how she admired the pope’s acceptance of the Lesbians, Gays, Bisexuals and Transgenders (LGBT) and those of different faiths and non-faiths. But despite her admiration of the pope, she still manage to write about how she feels about how there should be a clear line on religious blasphemy and free speech. The timing of this article is so appropriate especially with all the incidents that happened in France recently. It is clear that the author is talking about the violent episode that happened in Paris. The writer brought up concerns that we atheists have to deal with. Her bringing up the issue of free speech is the highlight of her article. Overall, that article is an excellent opinion piece that could enlighten and inform any type of god believers about the atheist’s side of the belief issue.

It is seldom that we see on a popular local newspaper this kind of an article, the type whose direction is different from the ones with bias towards religion would go. What a fitting timing for an article to get published. And articles like this will result to further discussions about the issue of separation of church and state. Most importantly, the article would teach people to think twice on how they should deal with everyone’s freedom of speech.