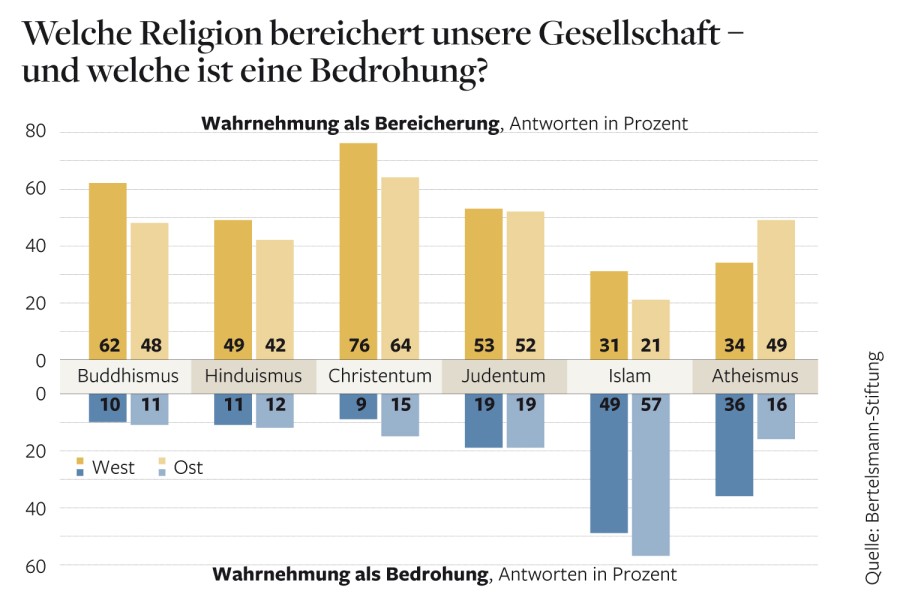 Threats and enrichment – The negative trend of Islam

There are several surveys and polls around, yet one survey was recently done by the “Bertelsmann Foundation”, the Bertelsmann Study about the threats of Islam in Germany, observing the mindsets of 14.000 peoples in 13 countries.

The Bertelsmann Foundation is committed to the tradition of its founder, Reinhard Mohn, for the common good. Their work is the conviction that competition and civic engagement are essential for social progress.

The Bertelsmann Foundation is an operational, conceptual working establishment. The primary goal is a large as possible and sustainable social impact of their work for society, and that their activities focus only on issues that have significant impact on the future viability.

They focus their work on areas which they have acquired through their project experience, particularly high skills: Better education, a more equitable and efficient economic order with a prudent health care, a vibrant civil society and increasing international understanding.

The Bertelsmann Foundation is independent and politically neutral. They initiate and make their own projects. As a learning organization they want to convince through competence. As an independent force for reform, they want to remove blockages that hinder the future development, hence to advance the development of society.

First results of their study about religion shows clearly, that high religiosity exists outside Europe, as in Europe religion is playing more and more less a role in peoples lives.

Turkey, with 82 percent, Brazil with 74 percent, and India with 70 percent religious peoples belong to the strongholders of a belief based life. In Sweden, with 28 percent, and Israel with 31 percent, this issue is at the lowest level, just to name two countries. Germany, with 57 percent of the people still being religious, the country moves in the middle section, yet with a very devided population. 26 percent of East Germany labels itself as religious, as in West Germany 64 percent have this belief.

As one group of peoples concider religion as an enrichment for society and life itself, many others, or even the same group see religion as a potential for conflict.

Overall, the rejection of Islam seems to be a phenomenon of the Western world. The study and questioning of the candidates here show that in Spain 60 percent of the peoples feel that rejection. The U.S. Deliveres a 42 percent result, in Switzerland 50 percent of the asked and in Israel it results into even 76 percent that feel threatened by Islam.

Clear opposition towards Islam may also result from their hard line statements. Many Muslims say: “Only my religion is right.” This of course leaves no tollerance or flexibility, making a point of rejection verbalized easier.

Another problem is, that one third of the questioned Muslims say, that religion and its representatives have to take influence in political decisions. That is obviously more than in other confessions. 39 percent of the asked Muslims say that only their religion is right and the other religions are incorrect, compared with 12 percent of the Catholics and 11 percent of the Protestants.

Coming to the section of ethical questions, there is a clear line between the East and the West. Taking the example of Germany, where the East and the West is still different by mind set, 54 percent of the West-Germans agree on abortion, whilst in East-Germany its 69 percent. Regarding the religious and non-religious; the non-religious support abortion with 73 percent, whereby the Muslims agree in this point with 35 percent.

One thing has become a comon trend; the support of democracy, including the seperation of religion and politics. The highest support can be found in Sweden, with 95 percent.

In Germany 51 percent of the peoples sees Islam as a threat, and looking at East-Germany only, even 57 percent, and although there are hardly Muslims to be found in this region of Germany. The rejection of Islam, and the peoples following this religion, seems to result from the stereotype Muslims present. With this, peoples rejection does not nessesarily result from a direct confrontation with Muslims, but just by the observation of their attitude. 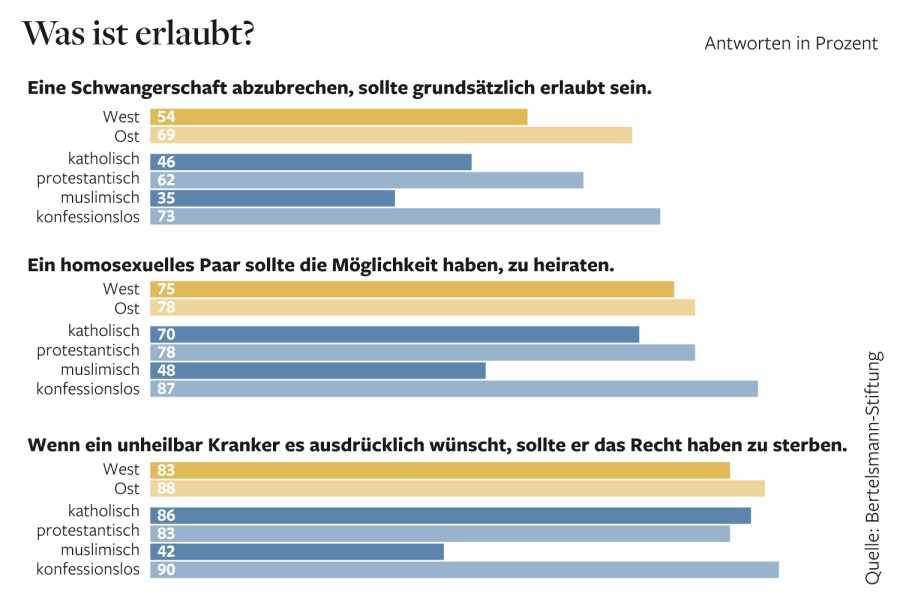 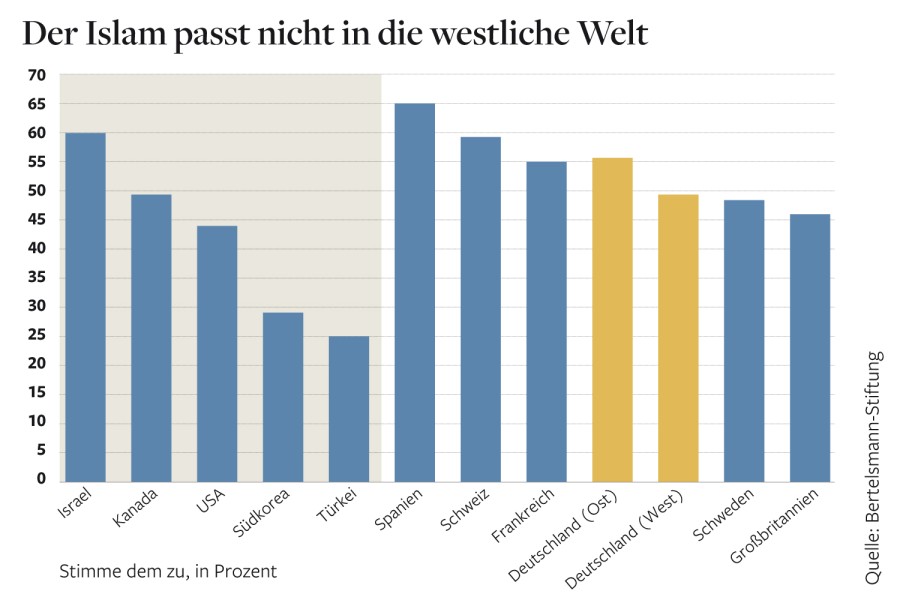