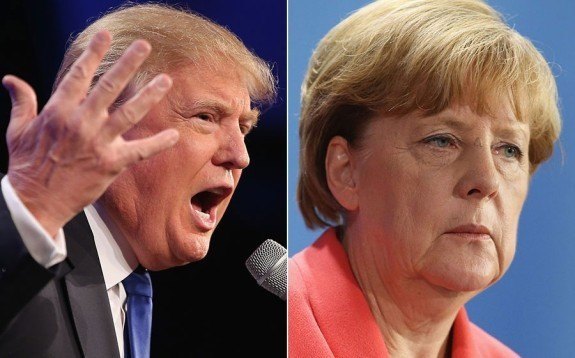 The German government is afraid

Frank Walter Steinmeier is Germany's foreign minister, a social democrat in the big coalition of CDU and SPD at present.

In August, Mr. Steinmeier called Mr. Trump a 'hate preacher', a religious term, we normally hear in regards to Islamic or Christian preachers, wanting to disturb public peace. Comparing Trump with the growing AfD (Alternative for Germany Party), he stated that "One can, one must extinguish this incendiary composition in the polling station." In France President Hollande spoke of a "nausea" (an urge to vomit).

Stunned, the chancellorship and the ministry of foreign affairs, followed the US elections.

In the typical Chancellor Merkel way, she ignored the Republican candidate, not just till the last minute, but even passing the victory announcement. Merkel is known for not positioning herself, committing herself to a fix stance. She waits and waits, observes the flow and then states something, that leaves her one or two doors open for future eventualities. She embraces everything and nothing, as observed in her politics. The other parties as the social democrats, the Greens or Liberals are no longer recognisable; even her own party isn't, as she has embraced all the other positions, making her party seemingly a party without alternative; until the AfD came (Alternative for Germany Party). Her only real commitment, a mistake without emergency exit plan, was the open door policy for the so called refugees.

"Hillary Clinton" wants to be the Merkel of America." Trump expressed; and this is in regards to the uncontrolled migration, importing Islam and terror. "Germany is going through massive attacks to its people by the migrants allowed to enter the country. New Years Eve was a disaster. THINK!" Trump twitter.

What Trump thinks about Europe, and what he is going to do with the EU, is completely unclear. Will the victory of Trump alienate the US from Europe? "You can not choose your partners all over the world", stated the Foreign Office and the Chancellor's Office alike.

In the UK, Prime Minister Theresa May said that she will speak to Trump at the earliest opportunity.

“Britain and the United States have an enduring and special relationship based on the values of freedom, democracy and enterprise,” she said issued in a statement by Downing Street.

“We are, and will remain, strong and close partners on trade, security and defence."

“I look forward to working with President-elect Donald Trump, building on these ties to ensure the security and prosperity of our nations in the years ahead,” she added.

It will be quit clear that the Anglo-American connection will strengthen, due to the protective policies both states have set their sails towards.

It is not surprising that the Leftist or establishment policy has reached the point of no return, and have blown the balloon to its bursting limit. The house is full, and there is no term as "fuller" in that regard; unless in the term of weaponry, which fits better, as a 'new era" war is in progress - 7th century against 21st century; apologists against realists!

The West throws with terms as "islamophobia" and "racism", but should rather admit that they are "anti-realists" and "belief system supportive". The German government, and many others on the same line have become afraid of the results of their own politics, without knowing or admitting that they were the cause. The religious would use the term "open the gates of hell", realism and rationality uses "open the gates of the mediaevals".

The ones they accuse of "islamophobia" are in reality anti Islam, and that's for a reason. One cannot call the Leftist establishment "realistophobe", because for a reason they are anti-realists.

Germany has committed itself to the US without questioning. The US spying out Merkels mobile phone, or launching drone attacks from German soil, no American action results in harsh attacks or defence actions towards the "big brother". Even if an alliance with Russia would be maybe better and strengthening for Germany; because the US declared Russia its enemy, Germans hands are bound; Germans businesses are even suffering in the aftermath of the US sanctions against Russia.

And now? Donald Trump has been speaking warmly about Vladimir Putin. This may conflict with the present hostile view of the Obama administration of Russia. Germany and many European countries are in a "stance vacuum" now.

Germany is a nation of do-Gooders. Its history has made the population and its governance soft and no longer belligerent. Everybody wants everyone to be happy and accepted, tolerated and left the way they are. But that is just on the surface. If one is showing opposition, one is verbally attacked, and of course unrealistic with the most worse vocabulary and labelled incorrectly stigmatising. Germany and Germans are afraid of their past, indoctrinated with guilt. Yet even though the past should never be forgotten, the present situation is completely different. The Germans may not be aware, that fascism is not only naziism or neo-naziism; but fascism is found in the left and in religion especially. When religion is no longer 'just' a private matter it becomes dangerous; if it mingles in politics, it becomes a threat.