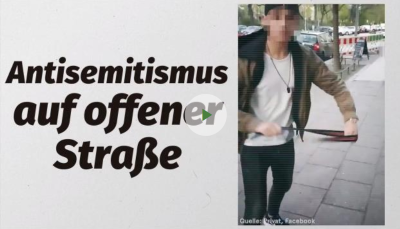 Antisemitism is a crime in Germany, ad of course it is, due to the dark history of Germany. And now, due to the open border policy, another illegal act implemented by the present government, Germany is importing antisemitism with open arms. It doesn’t require a PhD to know, that the enemy of Islam is Jewism.

Roughly two weeks ago, Berlin was faced with an incident that overshadowed the news.

In the district of “Prenzlauer Berg” in Berlin, two young men were attacked due to being Jew. This is what happened:

“Two Kippa-wearing men have been verbally abused and attacked in Berlin by three unknown persons. As the police confirmed, the 21-year-old Israeli and his 24-year-old German companion were on the way on Tuesday evening in the district of Prenzlauer Berg, as three perpetrators initially insulted the two men.

One of the group then struck with a belt onto the 21-year-olds. His companions yet are said to have prevented him on further attacks, according to police.

The 21-year-old Israeli filmed the attack. A video spread on the internet shows a young man slamming a belt and calling "Jahudi" (Arabic for Jew). The attacker says, "I'm filming you." As a result, the companion of the attacker pushes him away. In the background, a woman calls, "I call the police." Then the attacker shouts: "Jew or non-Jew, you have to deal with it." What happened before is not visible in the recording.

On Israeli television, the young man later said that he and his companion had previously "walked on the street in the normal way - we have not talked to anyone". Then three men suddenly started to abuse him. When his friend told them to stop, "they got angry, one of them ran to me".”

Shortly after the attack, the Central Council of Jews advises against wearing the Kippa, a little cap that is worn by Jews, therefor identifying them as such. Failure to oppose open anti-Semitism will ultimately endanger our democracy, "said the President of the Central Council of Jews. And right he is, as let’s think of another scenario. What if suddenly Christians are attacked when identified as such through wearing a cross on the chain, or Atheists or Agnostics, when wearing a t-shirt showing a quote of Christopher Hitchens or Carl Sagan? For sure there would be an up-rise of outrage from the Christian community and government; but for the Atheists or Agnostics, I would not dare to make a prognosis regarding the reaction from government. But nevertheless, both Christians and Non-believers are also the enemy of Islam.

“The Jewish Community in Berlin has called for a solidarity campaign with the Jews in the city on Wednesday. The motto "Berlin wears Kippa”; as many people as possible should set a sign against anti-Semitism.

The police have recorded an increase in anti-Semitic attacks for years, having had 288 cases in 2017. The Research and Information Center for Anti-Semitism Berlin (RIAS) has calculated even higher figures for 2017. It recorded 947 cases, including some that are not criminally relevant.”

On the 27th of April, another incredible case popped up.  Allegedly, the ex-leader of the BAMF has accepted bribes in Bremen. Asylum applications were wrongly granted asylum. This should have created significant security risks.

The affair of suspected wrong decisions in positive asylum decisions of the Federal Office for Migration and Refugees (BAMF) in Bremen draws more circles. According to "Spiegel" information, the suspended ex-leader should have foregone a security-relevant document check in one case. A co-accused interpreter is said to have received 500 euros from refugees. The prosecutor Bremen did not want to comment on both. There are many speculations, but only at the end of the investigation could be clarified, said a spokesman for the authority.

It is shocking how the Leftist bypass German laws and help illegal migrants to infiltrate the system. This not only hurts Germany as a country, but also shows how uncontrolled and wrong immigration works in Germany. Germany needs 35000 nurses and care takers, which people from Asia for example could do perfectly. Those migrants have no interest in destroying the system or creating parallel societies or no-go zones. They integrate well, learn the language fast and are of great help for society. Not that Islamic migrants stand out for mainly not being integrated, as their religion dictates their god Allah as highest authority and not German law, but due to its sexist and segregated policy, wouldn’t even allow women to be nurses or care takers touching men.

What adds worse on all the latter mentioned, as that now the AfD (Alternative for Germany) is blamed for what has happened. A recent statement rings alarm bells:

“From the point of view of the designated anti-Semitism commissioner of the Federal Government, Felix Klein, the AfD has contributed to the fact that anti-Semitism is more noticeable in Germany today. Klein said, "Anti-Semitism has become more blatant." This probably has something to do with the fact that the political climate has become rougher overall.”

This is an interesting and shocking statement which needs to be corrected. First of all, “anti-Semitism is more noticeable in Germany today”; that is true, but not the fault of the AfD. The AfD is just rightly pointing the cases out, cases the present and former government has just swept under the table. Silence is not solving problems! Further, Markel’s open-door policy has invited more and more anti-Semitic people into the country, resulting in an increase of attacks on Jews. So, who’s fault is it?